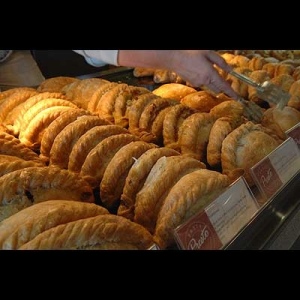 On holiday in Cornwall, trudging down a hill with heavy shopping from the ubiquitous Tesco’s over my shoulder, I reflect on the mixed bag which is this part of the world.

Tesco’s here is rather dispiriting. Tight car park (hence the trudge), narrow aisles, ponderous clientele, a lot of frozen food, only one aisle of fresh. Nice friendly staff though. Tesco’s know their demographic like no other retailer. I got what I needed but there was very little I wanted. I did feel obliged to bag an unmissable ‘two for one’ on dishwasher tablets though. Sucker…

Each Tesco (or the lack of one) reflects only two things – local planning constraints and near perfect knowledge of what local customers will buy. In Dorset the other week in a small rural Tesco’s I gave us zero chance of finding an inflatable airbed.

But there on an upper shelf it was – and with 30% off too. Naive and perhaps a little narcissistic of me to think I was the only camper with a flat airbed in that part of Dorset. Tesco’s knows better.

Today it’s a grey and rainy start in our bit of Cornwall. The same as yesterday. But it will pass. You get a bit of everything weatherwise most days here. I feel a bit grey too. Slightly jaded. Recovering from a trip down memory lane with a slightly higher octane of food and drink consumed than my engine thrives on these days.

Cornwall has rural poverty, less affluent holidaymakers and the well heeled too. Here the very well heeled are over the other side of the bay with their dinghies and catamarans. The plainer fatter folk on this side tuck into fish, chips and Cornish pasties. The slab-sided city boys of wealth and privilege visit to buy their pasties too. Dressed in yachting garb, they are also large, but in a more beefy way – as bespeaks a higher quality of calorie.

Last year we stayed the other side of the bay and I bumped into David Cameron, the nation’s Prime Minister, on the beach. He passed less than five yards from me (I’m sure he’d think in Imperial yards, eschewing le Eurometre). I looked twice to check. And then spotted his close protection officers perched on a rock poorly camouflaged in chinos. It was indeed he.

Cornwall is a funny mix. Pasties, clotted cream and clotting arteries. Richer and poorer all crowding onto the same beaches and seafronts. Sun, wind and showers blowing through – a bit of everything all mixed up together. There’s something for everyone here from PM to comparative pauper. And a world away from last week’s riots.

Not a bad place for a holiday all told – but four days in I’m giving up the Cornish pasties. They sit heavily on the stomach, whatever your demographic.