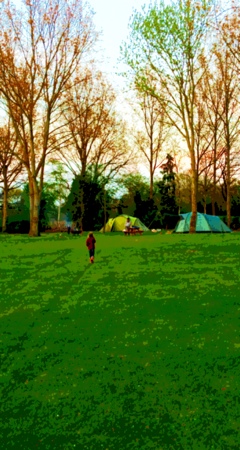 April fools under canvas
Sunlit striking
Followed by lightning
Humans huddle
Around a smoky campfire
Back to basics
Hot and cold comforts
Austerity Britain
Keeping afloat with the Joneses
Unseasonal camping confirms
Keeping warm
With friends and family
Is all.

Despite my diffidence, we were early out of the traps for camping this year. Forecasts (realised) of thunder storms and temperatures of 2 degrees C were enough to deter six out of seven families on our first night – but not us.

Joined at midnight by family number two and then plucky three and four on the second day, it was initially very wet, then cold, then bright and breezy. In a man-made return to pre-history, a fire makes it bearable.

And once the kids are off to bed, with a glass of something warming in hand, there’s a camaraderie about camping which brings out the best in people. Everyone’s struggling a bit in this recession, but we’re keeping the home and camp fires burning.