I’ve just finished Desmond and Mpho Tutu’s ‘The Book of Forgiving’, picked up (as all the best things are) at the local library.

It’s a simple and powerful read, which is studded with some terrible stories of personal loss, sickening violence and genocide; and the remarkable power of forgiveness in the face of them.

The basic argument is forgiveness doesn’t excuse responsibility – it explicitly acknowledges and names it. Only once the ‘story’ is properly told, and the ‘hurt’ is ‘named’, is there the possibility to forgive.

And doing so is the way to be freed from being a victim – including forgiving yourself if you were ever a perpetrator.

There is a straightforward path to forgiveness which helps people exit the alternative – a never-ending cycle of harm and revenge. 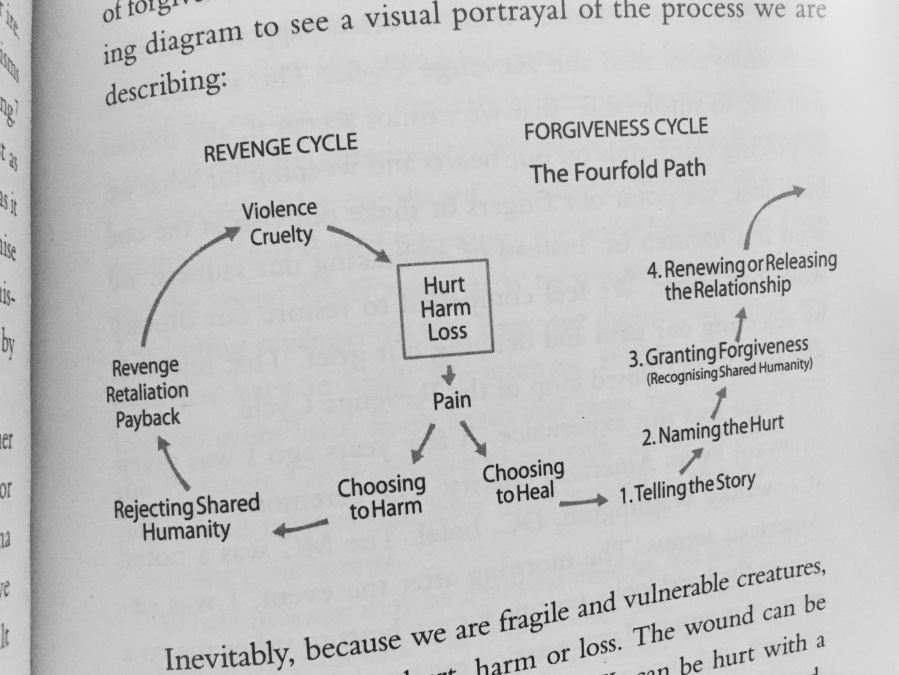 I saw this diagram the night before interviewing someone on a difficult HR standoff. It certainly helped me to listen for longer: to let the person ‘tell their story’ and ‘name their hurt’, which seemed to move things forward.

The final two steps – ‘granting forgiveness’ and ‘renewing or releasing the relationship’ are about seeing  ‘perpetrators’ as human beings – recognising none of us was born evil and we all have within us the capacity to do terrible things.

Easier said than done; but nobody said it was easy – and it’s the only path to forgiveness.

The ‘hurts’ Tutu has seen in South Africa and Rwanda – so many violent murders – seem too huge to ever forgive. But the Truth and Reconciliation commissions he oversaw all basically followed this fourfold path: tell the story, name the hurt, grant forgiveness and renew or release the relationship.

As both he and the Dalai Lama have said: forgiveness is both a source and a sign of true personal strength,