As a red London bus burns a few hundred yards from our house, it’s one of those moments when you stop and think, ‘Did I get this very wrong?’

We have always taken the view that the ‘cheek by jowl’ nature of urban London was worth the aggro. It’s vivid, lively, mixed – at times a bit edgy but alive. And nice ‘people like us’ live dotted all around.

But people who are not like us live all around too. And when it all goes up in smoke and dead eyed teenagers smash up your high street, it makes you think.

In Aristotle’s day another city state or a neighbouring tyrant could violently disturb your contemplation. In Montaigne’s, frequent bouts of plague and civil war.

A few boarded up shop fronts and burnt out buildings is hardly a siege and sacking or a street by street pogrom. But still. It feels bad. I’ve been anxious today. For my kids, for my other half, our house and our safety. We are always but a few authority figures away from mindless violence, a few laws from anarchy.

Ordinary decent people are feeling it too. I’ve seen several almost exaggerated acts of courtesy and consideration between people of all colours and classes on my way to and from work. Pausing to let each other pass, small acknowledgements and hesitant smiles. In these acts people are trying to say “It’s ok, we’re ok.” Post it notes on a boarded up shop eulogise our area and criticise the yobs. A volunteer army came out armed only with brooms to clean up. 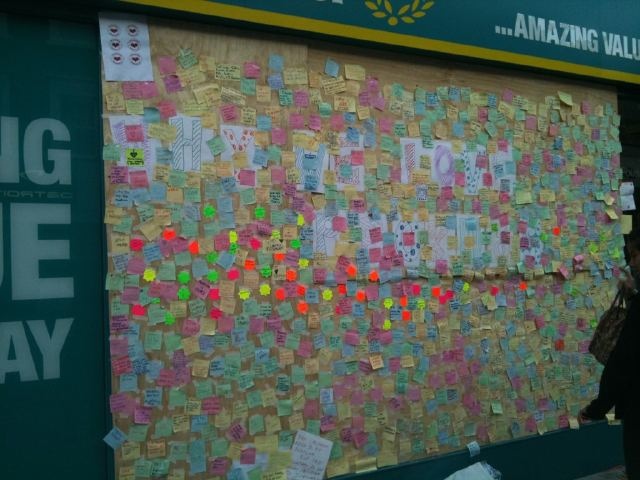 It’s finely poised in London today. As Aristotle said man is both the best and worst of animals.