I’m really enjoying Terence Green’s ‘Philosophical Haikus’ in Philosophy Now… Bitesized chunks of wit and wisdom which make you think. This month’s is on the controversial economist Friedrich Hayek.

The full text is down below (and I’m hoping Terence and Philosophy Now will forgive me as I do recommend a subscription to what one of my favourite reads).

But the bits which got me thinking are these:

…humankind is possessed of a singular desire to control: to control our environment, to control society, to control other people (cf Nietzsche’s will-to-power). Control is hoped to be a way of ridding ourselves of uncertainty; and more than anything else, human beings are troubled by uncertainty.

This speaks to the worries and anxieties we all endlessly lock onto: the Existentialist ‘lack’, Buddhist ‘clinging’ and the endless ‘control dramas’ of interpersonal relations. We are both bored by and possessive about what we have, fear what we don’t know and worry constantly about other people and the future.

We’re all about control.. are we beyond help?

But, said Hayek, this belief [in control] is just hubris – the sort of arrogant over-confidence for which the Greek gods were always punishing people. In the absence of the gods, we’re punished by the circumstances we create.

Maybe the answer is, mentally, to bring back those Greek gods – capricious, mercurial, tempters and temptresses, spiteful and unpredictable; but ultimately (kind of) on our side.

If life was unavoidably a rollercoaster ride of being tossed about by Zeus and the others, perhaps we might enjoy it more. Let go of the illusion of control and it’s unalloyed fun when it’s going well and less painful when things go badly; it’s all in the lap of the gods.

After all, chance seems to be beating control hands down in 2020.

Hayek’s reputation as an economist and political philosopher has suffered on account of his popular but vitriolic and unbalanced rant against state power, The Road to Serfdom (1944). In it he argued that even mild, well-intentioned attempts at central planning will inevitably slide towards authoritarianism. The book was appropriated by the worst zealots of neoliberalism. But there remains much wisdom in the fundamental points he returned to time and again.

The Enlightenment bequeathed to us a seemingly unshakable confidence in the capacity of human reason. Reason sets us apart from the beasts and gives us the power to shape our world after our own designs. It matters not that history is littered with the burnt-out wrecks of infallible schemes for the creation of the ideal society: we still cling to the belief that by the application of reason we can diagnose the illness and prescribe the cure for the human condition. Indeed, this belief is the very foundation of modern government. Every policy a government introduces is predicated on rational analysis, with the assumption that the policy will produce the desired effects. Along with this faith in reason, Hayek claims, humankind is possessed of a singular desire to control: to control our environment, to control society, to control other people (cf Nietzsche’s will-to-power). Control is hoped to be a way of ridding ourselves of uncertainty; and more than anything else, human beings are troubled by uncertainty. We wish to alleviate the pain of not knowing, and believe we have the ability to do so. But, said Hayek, this belief is just hubris – the sort of arrogant over-confidence for which the Greek gods were always punishing people. In the absence of the gods, we’re punished by the circumstances we create.

For Hayek in 1944 there was a broader context – of fascist and communist totalitarian regimes, that justified their murderous actions on the basis that they knew how to create the perfect society. Even if you start out with impeccably admirable intentions, any government that seeks to reshape society on the basis of some ideal blueprint will risk turning its citizens into slaves in order to realise that ideal. There cannot be a single right way to live or to organise society; and even if there were, we can never know enough or be wise enough to bring it into existence. It’s a thought worth pondering.

Talking to my daughter about her friendship angst this morning, I advocated she try a welcoming smile.

I told her about the nice lady at work who told me about the cold snap in Romania and how it’s threatening the cherry trees; people are tending fires to gently waft smoke through the branches to protect the cherries. We both wished them well.

This lovely encounter grew from simply smiling, on three occasions as she made me a latte; and the smile developed into an exchange and then a conversation.

Let’s see how my eldest gets on – I suspect it might take me than a smile with this ‘friend’.

I’m reading a rather terrific book about letting go of anxiety and fear and tapping into your own energy.

More of this anon, but one of the many useful reminders is nearly everything that happens to us, in truth, is outside of our control. This means there are only two options, try to resist, control or avoid life – or roll with it.

This week (like so many) looked on Tuesday morning (after an enjoyable but tiring bank holiday) like wave after wave of bother, problems, egos, unreasonable demands, risks and stressors; culminating in large forum event – at which I would have to orchestrate, perform and keep the whole show together.

So it was; but by (largely) surfing along on the top of it all and not fighting it (and myself) I got through it just fine. By saving the energy on worry, avoidance and fear – I got it all done quite happily.

As King Canute amply showed, there’s little point trying to stop the waves; may as well get up on your board and ride ’em.

My old friend sleep. I need it so much, I never get enough of it and I never do enough to make sure I do. But I have improved in a few areas… to earplugs I’ve added eyepatches and from last week a booze curfew at 9pm.

All the book and all the sage advice in them can’t help me when I’m tired. Without my sleep I’m hopeless; with it I’m smiling and surfing along. 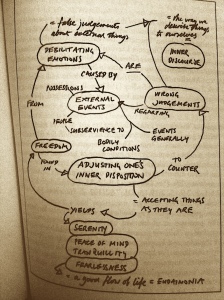 Twice this week I made myself feel a lot better by acting to adjust my ‘inner disposition’. Before Christmas I read the Stoic Epictetus’s ‘Handbook’. The translator and expert guide Keith Seddon has produced a simple summary of Stoicism in a flow diagram (above). In the centre is ‘adjusting one’s inner disposition’ which reduces ‘wrong judgements’, ‘debilitating emotions’ and overreaction to ‘external events’ – notably people. The products of an adjusted ‘inner disposition’ are ‘serenity’, ‘peace of mind’ and ‘fearlessness’.

I associate Stoicism with passivity. Shrugging the shoulders, avoiding situations, retreating to the intellectual ‘cave’ and keeping your head down. I conclude from this week it ain’t necessarily so. Why? Because in both cases I ‘adjusted my inner disposition’ by taking action ‘in the moment’, not reflecting on it too much, and in the process letting go of the ‘debilitating emotions’ almost immediately.

The first instance was easy. I was fuming about my day at work and the inappropriate behaviour I’d been subject to. I put my iPod on and tapped out a rant (which I kept to myself) on my iPhone. Rant written, fave tunes playing, my ‘inner dispositions’ changed in less than 5 mins. I let go and felt better.

In the second instance, I also wrote a rant, but this time hit Send. Risky. And after an hour with no answer, I started regretting it. But like hitting the reset button, or turning a computer on and off, my head and heart were cleared. So when the time came to deal with the consequences of my rant, I had a better ‘inner disposition’ and we changed the air.

Many of the great thinkers draw on Stoicism. Kierkegaard, who I’m enjoying at the moment, places taking responsibility for your own life as part of his ‘ethical’ stage of life. Aristotle advocates thought and action. Like Achilles though, sometimes I have to act – not think – to achieve ‘serenity’, ‘peace of mind’ and ‘fearlessness’.