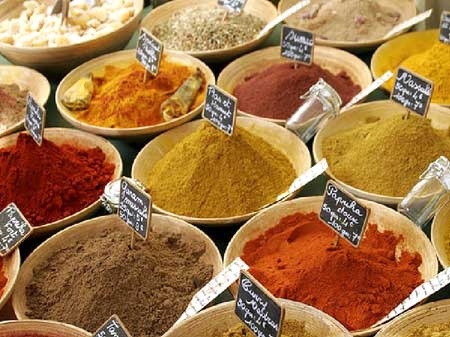 My new theory of everything: all purpose and enjoyment in life is found in ‘relevant complexity’.

I came to the idea via the Hungarian American psychologist Mihili Csikszentmihalyi’s theory of ‘flow’: that we achieve optimum experience when we meet considerable challenge with considerable skill. Or put another way – when we master complexity.

I propose, that, the value of doing something and the intrinsic enjoyment in doing it, lies in it having and creating further ‘relevant complexity’. Let’s prove the pudding with food.

Does relevant complexity describe our relationship with food? Yes, I think it does. I’ve started doing lots of cooking lately – not least Indian. I seem to really enjoy it. Why? It needs doing. I get a break from the kids. When I get it right I get positive feedback from the missus. And, I mostly quite enjoy eating what I cook.

Notwithstanding there are some great dishes which are very simple, most of what’s considered ‘tasty’ in the world’s cuisines involves blending different ingredients, tastes and textures in relevant complexity.

To many, too much of one, one that’s out of place or the wrong blend of ingredients creates irrelevant complexity – often simply nasty. In fact I’d argue that even the simplest ‘great’ foods rely on great ingredients – which are often very complicated to grow, make or rear, requiring optimum care and conditions.

As the scientific chef Heston Blumenthal points out, cooking is applied chemistry. The complexity comes in applying it to that most unpredictable of non-linear systems – human taste.

And tastes develop and mature with experience. Taste doesn’t stand still, it is cultivated and grows. Blame ‘flow’, if the challenge doesn’t move on we become bored.

So, I conclude the joy in making and eating food lies in creating, enjoying and cultivating a taste for ‘relevant complexity’. It’s the spice of food life. Mmmm.

A good friend put me onto the ‘flow’ psychology of Mihaly Csikszentmihalyi. As is not uncommon with names with unfamiliar spellings, it’s easy to glide over Csikszentmihalyi in text while subconsciously logging him as unpronounceable. But if you are going to commend him to others it’s good to get your mouth round his name. Broken up it’s not so hard ‘Chick-sent-me-hi-yee’. And there is modest satisfaction to be had in mastering the unpronounceable – a theme I will return to…

Csikszentmihalyi’s thesis is beguilingly simple. ‘Flow’ is the exhilarating feeling of meeting ‘high challenge’ with ‘high skill’. When challenge is low, and our skills are too, we slump into boredom and apathy. When challenge is too high we suffer worry and anxiety. Where our skills comfortably exceed our challenges we are relaxed or in control. When a challenge threatens to stretch us we are alert and ‘aroused’. Finally, ‘flow’ is that feeling of achievement, fulfilment and flourishing which comes with doing a difficult thing well.

In the classic ‘flow’ diagram (above), there are eight segments: control, relaxation, boredom, apathy, worry, anxiety, arousal and ‘flow’ with a point of intersection in the middle. Some people add a ‘subject mean’ as a central zone around the point of intersection which is our personal average zone for a given activity or situation.

When I first looked at one of these diagrams I more or less cottoned on to the eight segments. But I couldn’t decide what to make of the point of intersection – is it a good place? Or a bad place? Or is it a completely neutral place?

Over last weekend, playing football, then watching it, a children’s film, my mother and thinking about ageing bodies and minds, I conclude the ‘subject mean’ or ‘point of intersection’ is a moveable feast. And therein lies the rub, it seems to me. With ‘flow’, the goalposts are constantly moving – and not just one way.

How so? One of the great lessons of adult life is that aptitude usually comes a poor second to application and practice. Almost everything gets easier with practice. Equally, no-one from Einstein to Nijinsky achieved great skill without hours and hours (or if you believe Malcolm Gladwell more or less 10,000 hours) of practice. Watching my kids trying new things they readily assume – as I did when I was young – that they are ‘good’ or ‘bad’ at something due to early luck or accidents of fate.

Certainly some kids learn faster than others, some are more physical some have greater dexterity. But like everything with nature and nurture, these basic skills and aptitudes are developed or not developed by the hours spent at a blackboard, in ballet shoes… or in football boots.

On Saturday I was kicking a football about with my son. I was a decent footballer in my day, but very one footed. No left peg. But trying it, within the space of a dozen passes concentrating uniquely on using my left foot, I went from feeling completely off balance to passing comparatively cleanly, crisply and accurately. Not exactly ‘flow’, but some ‘arousal’ and less ‘anxiety’ than the first clumsy attempt. My point of equilibrium had shifted a little.

Later in the day, I watched one of the most talented midfielders of the last 15 years demonstrate the opposite. Paul Scholes saw red in the all Manchester FA Cup Semi-Final at Wembley. A lunging high tackle earned him a sending off. His immensely gifted feet, and the quickness to single-handedly turn a game, now were fractionally too slow to ‘flow’ at the highest level. He was ‘aroused’ to futile anger instead.

From a footballer’s inexorable decline, to the sad story of 1970s Prime Minister Harold Wilson which preys on my mind from time to time. We all hope that when the body falters the mind will stay sharp. Poor Harold Wilson, who went to the same Oxford College as me, was allegedly the first to realise his hitherto razor sharp brain was slipping. He felt the need to resign quickly before anyone else noticed. From Paul Scholes and Harold Wilson I infer our ability to ‘flow’ can diminish with physical and mental decline – and our ability to cope with it too.

But perhaps inexorable decline is not the way to think about ‘flow’. Watching my mother play with my kids on Sunday, she showed them a yoga stretch which her yoga teacher recently described as ‘awesome’. She won her first ever lawn bowls team trophy last year and took the individual ladies prize this year. She is 67. Perhaps we need to be kind to ourselves and move our interests and our ‘mean points’ so we don’t lose our own joy as we age. I think of this on my bike some days when cycling to work feels like a chore. In a decade or two I will dream of the physicality and strength I take completely for granted in those moments. It changes my perspective.

But even if we are kind to ourselves over the long haul, finding ‘flow’ every day is a new challenge each and every day. On Saturday morning I watched ‘Night at the Museum’ with my boy. It’s a jolly Ben Siller romp in a New York museum where all the exhibits come to life and brawl with each other at night. It’s my son’s current favourite. As with so many of the US kids genre, there are plenty of worthwhile homilies and invariably a good moral to the story.

After twists and turns and trials and tribulations this one ends with father and son reunited and Attilla the Hun, Christopher Columbus and assorted cowboys, animals, Romans and great Americans dancing together in one big non-alcoholic all night party. The moral of the story? If we all pull together, everyone can get along. But in the real world, once the ‘flow’ of a romping script’s worth of challenges had been briefly toasted, they’d all have been ‘bored’ and ‘apathetic’ by morning – and fighting again the following night. With ‘flow’, unlike fairy stories, there are no “happily ever afters”. Every day needs filling. No challenge, no ‘flow’.

So Csikszentmihalyi’s ‘flow’ is both blessing and curse – like Aristotle’s Eudaimonia, it’s a life’s work, and there is no easy solution. To paraphrase Csikszentmihalyi himself: life is “what we experience from morning to night, seven days a week, for about seventy years if we are lucky, for even longer if we are very fortunate… there are no gimmicks, no easy shortcuts. It takes a total commitment to a fully experienced life, one in which no opportunities are left unexplored and no potential undeveloped, to achieve excellence.”

So every day, whether it’s kicking a ball with my left foot, unevenly strumming a ukulele or lashing together another blog post, all are opportunities to ‘flow’. The art of ‘flow’, I think, is recognising it is there to be had in small things as well as large, in things we are objectively very ‘good’ at. But also in things we aren’t but are prepared to give a try.

And if ‘flow’ is an internal ‘feeling’ then we substantially have the power to judge it and feel it for ourselves. So I’ve decided the art is in choosing well the things we invest time in doing, being kind to ourselves in setting the bar and not being too hard on ourselves as we progress. Like a personal pacemaker in our own race of life, ‘flow’ runs only as fast and as far ahead of us as we let it.