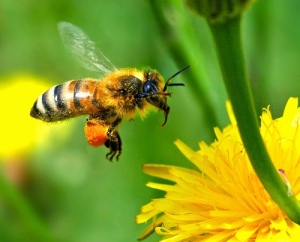 I was talking to a very good friend yesterday about bees. It came up in a digression about the very different ways some people find to live a life.

He described the case of a foal, born prematurely, who had imprinted on the people who’d nurtured it. Spurning other horses, the foal considered itself eminently human and preferred the company of people. A problem for it and them.

More remarkable was the solution – a horse-whispering woman – who makes a living going round the country brokering misguided premature foals back into the world of horses. She eases their separation from the two-legged world back to four.

In exchange, I told him about my conversation with a nomadic beekeeper this spring. Bee keeping, it appears, is all about titivating, then tempering, the hive’s desire to swarm. A healthy, happy, busy hive is a productive hive. But a productive hive is also an unstable one.

Experienced workers get itchy feet and start looking for new opportunities. Young upstart queens start getting restive, fancying their own realms. The hive is dripping with honey, but disaster threatens – 60% of the hive swarming off with a new queen – leaving a remnant hive which will take a year to produce again. No honey for the autumn pot.

Separating queens, creating sub-hives, clipping wings are all recognised measures. But the more the beekeeper gambles, the more risk that several queens buzz off. Or worse, the entire hive ‘absconds’ in the vernacular. Ouch. My nomadic beekeeper had about five queens on the go, in three sub-hives, all itching to swarm and pumping honey like a Texas gusher. He lives his beekeeping on the edge.

In olden days they worried less. Beekeepers trusted to chance and mother nature. Wikipedia offers the wisdom of a gentler era:

The world of bees has moved on from the buzz and burr of rural idyll. Much like the world of work, it’s all more organised now. Productivity and efficiency are to the fore not serendipity and chance.

My friend and I agreed, with bees – as in working life – keeping the hive busy and productive is a fine art. Swarming costs you honey and money. Disturbing the hive gets you stung. One of my golden rules for work, is never whack too many beehives at once.

There is evidence, the nomadic beekeeper told me, that honey bees followed humans out of Africa. Who was following whom and who got more from it I wonder? Bees are eusocial – they work together. Humans are social and selfish simultaneously, only very careful beekeeping keeps a human hive happy. There’s a lot we can learn from bees.