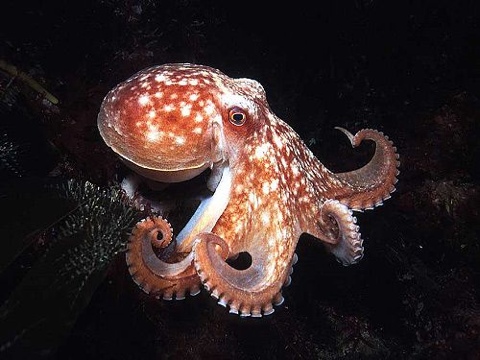 Why is an octopus smarter than a snail? Same family, same squishy body. Yet one is entirely predictable, the other spookily individual. Is it ‘in’ their bodies?

Having reflected on the ’embodied intelligence’ in a strawberry last week, I read that some Roboticists are moving on from the clever brain/dumb body ‘central processor’ model. Powerful chip-sets and nuts and bolts are being pushed aside by inherently ‘clever’ squishy limbs and appendages better adapted to their task.

Why pick up a fragile glass with a big clunky metal hand, when a rubber bag filled with coffee grounds, attached to a vacuum pump, morphs perfectly to the job?

Embodied intelligence is an interesting thought. Millions of years of evolution mean my leg swings naturally forward and lands in front of the other when I walk. The brain has very little to do. The ‘intelligence’ is largely designed in. Aquinas would recognise this – for him our bodies, like our emotions, are a full part of our ‘reason’.

The matter arising is, are octopuses smart because they evolved a big brain – for the joy of contemplation, communication, complex waving and changing colour? Or does an eight legged body (actually two ‘arms’ and six ‘legs’) mean high intelligence ’emerges’ as a bigger brain develops in response to increasing bodily complexity?

It’s all a bit simpler for a snail – A to B at a foot per minute. Perhaps that’s why they’re a bit simple. The surest predictor of animal brain size is body size. I wonder whether complexity of motor skills and sensory apparatus isn’t a big driver too.

What does it mean for us? First our intelligence is ’embodied’ in quick fingers, rapid eyes and sharp ears. Perhaps also what it means, is we aren’t Cartesian ‘ghosts in machines’. We aren’t software and hardware. We are completely integrated ‘wetware’ – like an octopus, as much arms and legs as big brains.

So if we want to build smarter tools and helpers, and understand ourselves better, inspiration from nature – not Fritz Lang – is the answer.

One thought on “Embodied Intelligence”