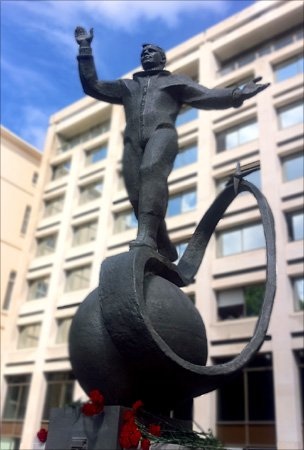 Today I spent an hour, at the unveiling of a statue to Yuri Gagarin, with the man who has spent more time in space than any other – the Cosmonaut Sergei Krikalev.

Poised, distinguished and himself chipped from granite, he is definitely the man you would want in the space capsule with you if something went wrong. He’s ten years older than me and found himself circling the earth when the USSR imploded leaving him temporarily stranded in outer space. Having met him, I expect he took it in his stride.

I talked to him about fitness loss in space, cosmic rays causing flashes in your eyes (a dozen per half hour or thereabouts in his experience) and experiments to test what snails had in common with dinosaurs (inconclusive).

As you might expect, given the things he’s seen, he had some reasonably profound things to say about international collaboration, friendship and what humanity has and can achieve.

My summary of his wise words:

While the ancients thought the world was infinite – and perhaps bourne on the back of elephants – when you see it from orbit you see it is big, but really not that big – and above all you see it is finite.

That the international friendships he has made are his greatest treasure and that international collaboration in science and space has always transcended the politics in his time in space.

Space is unbelievably hostile. And when all that separates you from it is a few millilitres of aluminium – which you could easily puncture with a kitchen knife – you recognise how fragile your existence is.

To say that ‘going into space has been done’ and ‘there’s nothing more to do’, is like saying the Romans built roads so why bother building a train.

Finally – and his eyes lit up on this one – the future is always exciting, we will go further and we will always reach for the stars.

A ramrod straight, decent and good man I concluded, with the quiet bravery of a modern day Achilles.