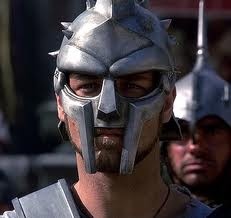 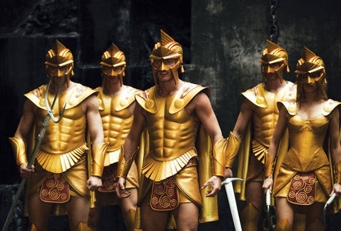 As I read and write more, I come to enjoy the turns of phrase of past times. I’m not arguing for Chaucer in the original – life’s too short. But the thundering prose of the King James Bible or a decent translation of Aristotle, for example.

Having learnt that ‘plot’ is everything in poetry, I largely fell for Aristotle’s Poetics based on one line:

The getting-up of the spectacle is more a matter for the costumier than the poet.

I’ve quoted this at work a few times to point out the job at hand – substance not spin. And I found myself quoting it to the missus last night having watched ‘The Immortals’, which I found a big disappointment.

I do enjoy a good ‘sword and sandals’ epic, and I really wanted to like it. But ‘The Immortals’ managed to make very little of the ‘plot’ of Theseus, whilst expending far too much effort on the costumes and CGI. They even ripped off Maximus’s helmet from ‘Gladiator’ for an all too boyish Zeus (see above).

Ridley Scott knows, as Aristotle said, that: the first essential – the life and soul of Tragedy – is the Plot. I fear the Director of last night’s disappointing fayre, was reading the more leaden modern translation of my favourite ‘Poetics’ quote, from the duff version I bought on my Kindle:

The production of spectacular effects depends more on the art of the stage machinist than on that of the poet.*

Too much stage-machinist and not enough poet in ‘The Immortals’ for me. Had Aristotle seen it, he’d be gently shaking his head – more in sadness than in anger. Theseus, the founding myth of Ancient Greece, was very much lost in translation.

*So if you’re buying Aristotle’s Poetics, I’d buy Ingram Bywater’s 1920 OUP translation, which you can get for free on dailylit.com.